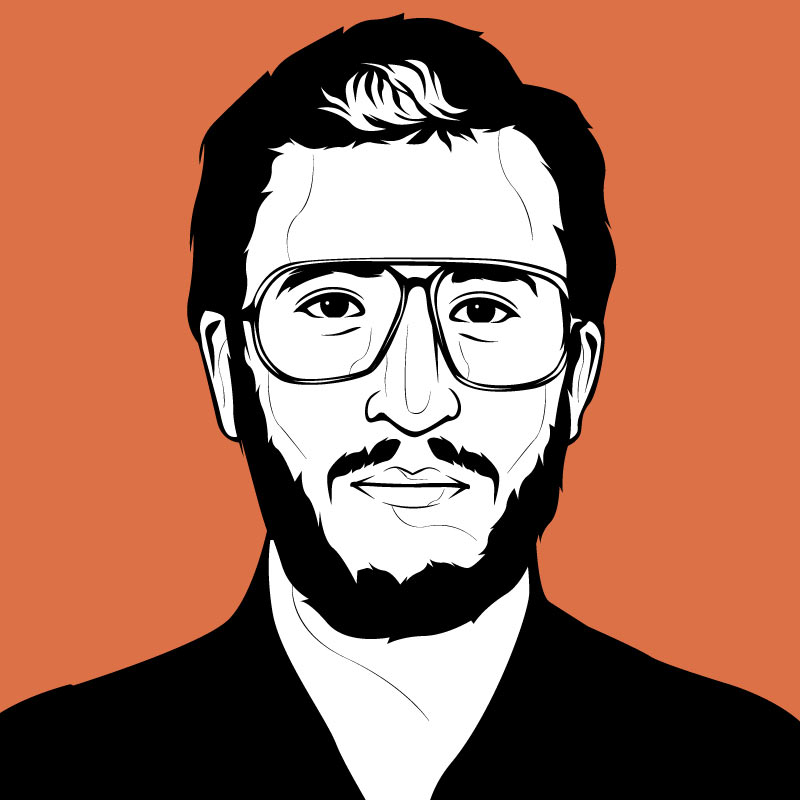 Saeed Emami was responsible—at times directly, at others as a planner and supervisor—for the murders of many intellectuals and political dissidents between 1988 and 1998. Also known as Saeed Eslami, he is one of the most ignominious figures in the history of the Islamic Republic, matched perhaps only by Sadegh Khalkhali, the man responsible for the execution of hundreds of former Pahlavi regime officials and members of the Kurdish and leftist oppositions after the Revolution.

Emami was born in Abadeh, near Shiraz, in 1958, and moved to the United States to study aerospace engineering at the University of Oklahoma in 1976. Saeed Hajarain, a Reformist and former intelligence official, says that Emami went to the US before he completed high school. Other sources say that he went to the US after graduating from high school by passing the eazam—the special exam for students with hopes of studying abroad.

In the US, he joined the Confederation of Iranian Students and Muslim  Students Association. After the Revolution, he was hired by the prime minister’s office as the agent in charge of gathering information from the US.  Saeed Hajarian, who interviewed him for the job in 1980, said that although Emami had a green card and good references, he couldn’t be convinced to trust him. Hajarian reported to his superiors that Emami should be employed not as a double agent, but only to collect and transmit information from the US to Iran.

Emami’s family was not a revolutionary or religious one. His father, Akbar Emami, was the head of education administration in Abadeh before the Revolution; his mother, Homa-rokh Etemaad, in her youth was a member of the Organization of Young Tudeh, a branch of Iran’s communist Tudeh Party. His uncle Hossein Etemaad was a military attaché in Washington. Perhaps this family background was the source of Hajarian’s mistrust; regardless, Emami soon became a tool of terror for the Islamic Republic.

At first based in New York, Emami started working as an intelligent agent for the Islamic Republic. Foreign Minister Mohammad Javad Zarif states in his memoir that he and Emami participated in sessions of the General Assembly of the United Nations to defend the Islamic Republic against charges of human rights violations. Emami also worked in the Interests Section of the Islamic Republic of Iran.

The exact date of Emami’s return to Iran is unclear, but he was in Iran in 1984 when the Ministry of Intelligence was established. Hired by the ministry, he would go on to serve as deputy minister under Ali Fallahian (1989–1997), during which time he planned and oversaw many terror projects in Iran and abroad. The years-long terror project known as the Chain Murders in Iran was stopped and revealed only after it accelerated in the second half of 1998: In September, poet and teacher Hamid Hajizade and his nine-year-old son were killed in Kerman, stabbed dozens of times. The spree continued with the killings of sociologist Majid Sharif on November 19; political activist Dariush Forouhar and his wife, Parvaneh Eskandari, on November 22; poet Mohammad Mokhtari on December 2; and translator Jafar Poyandeh on December 9. This series of murders indicated a well-planned and officially endorsed project. Public pressure finally led President Mohammad Khatami, who had campaigned on a platform of reform, to order the Intelligence Ministry to release a statement in January 1999, in which it attributed the Chain Murders to a “group of rogue elements” in the ministry.

Emami and several colleagues were arrested. In jail, he confessed to multiple murders of secular intellectuals and writers, but only a few of them were officially announced. Between 1990 and 1997, at least 66 intellectuals inside Iran were killed. It is widely believed that Emami had a crucial role in organizing the assassinations. According to an investigative journalist, Emadeddin Baghi, Emami is also responsible for the death of Ali-Akbar Saeidi Sirjani (a leading researcher of Persian literature) in jail in 1994 and Ahmad Khomeini, Ayatollah Khomeni’s son, in 1995.

In prison, Emami said that he was an obedient soldier of Velayat (the supreme leader) and had done no more than follow orders. Under interrogation, his wife, Fahimeh Dori Nogorani, referred to Emami’s close ties with Khamenei’s oldest son, Mojtaba, and said that Saeed had accompanied the Khamenei family on their trip to London in 1990. Emami died in prison in June 1999, purportedly committing suicide by drinking a depilatory compound in the bathroom. It is widely believed that he was killed or forced to commit suicide to prevent him from revealing secrets about the Chain Murders and other terror projects with which he was involved.