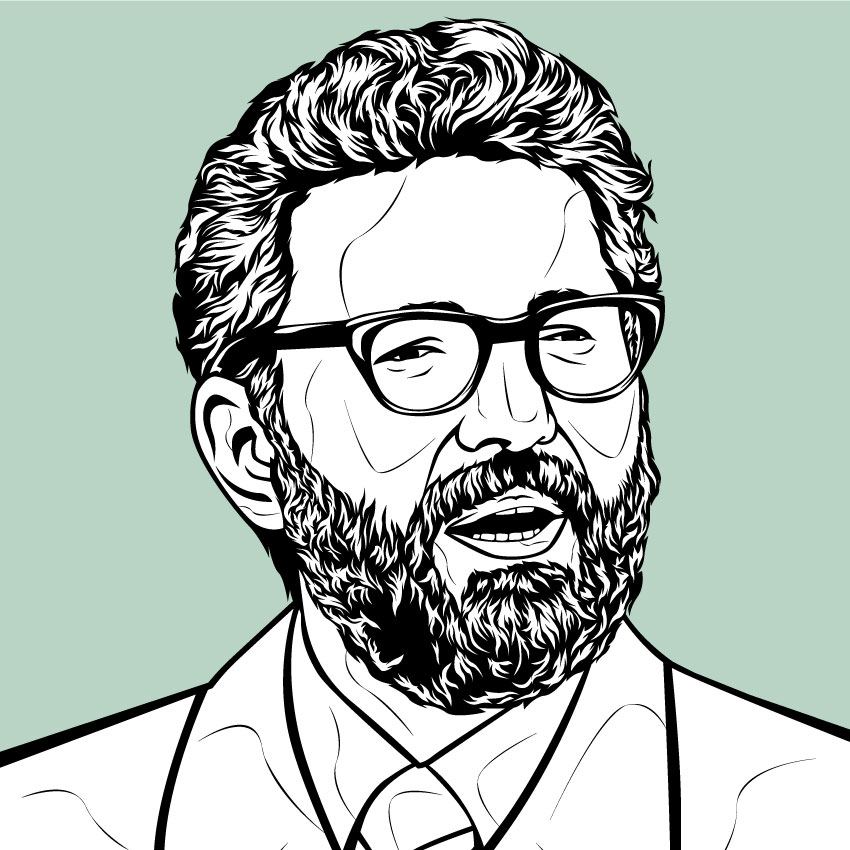 Ebrahim Yazi, a well-educated revolutionary, was from the generation inspired by Mohammad Mossadeq and the National Front and who harbored deep grievances from the 1953 coup. He was born in 1931 in Qazvin to a wealthy family. He studied pharmacy and then philosophy at the University of Tehran, receiving MAs for both. He then moved to the US to continue his studies and received a PhD from the Baylor College of Medicine in Houston in biochemistry in 1969.  He worked there as a research assistant of pathology and research instructor of pharmacology until 1977.

Yazdi was politically active in the US and with Mostafa Chamran, Sadegh Ghotbzadeh, and Ali Shariati established a branch of the Freedom Movement of Iran (FMI; Nehzate Azadi Iran) in 1963 that was known as a radical arm of the movement, due to their advocacy of armed resistance against the Shah. They established an organization in Egypt to coordinate Iranian political activists abroad. Yazdi also made strong connections with Palestinian and Lebanese groups for the training of Iranian activists and, with fellow FMI member Mohammad Tavasoli, established a bureau in Beirut. Because of Yazdi’s activities against the Shah, he couldn’t return to Iran and became a naturalized US citizen in 1971.

Yazdi, in a 1990 letter to Ahmad Khomieni, wrote that throughout his years abroad he had been in touch with Ayatollah Khomeini, collected religious donations from abroad for him, and almost every year traveled to Najaf to see him. Yazdi was the one who proposed that Khomeni move to Paris when he was expelled from Iraq and Kuwait didn’t accept his request for residency. Yazdi traveled to Najaf to accompany the ayatollah to France in 1978. In Paris, he and Ghotbzadeh helped Khomeini to settle in and helped bring his message to the Western media. Serving as Khomeini’s advisor, Yazdi translated his words in a way so as not to be incompatible with the modern world’s modern values. Yazdi, as he wrote in his memoirs, prepared “Khomeini’s political plan” and “power transition” after the Shah went into exile by establishing the “revolutionary Council,” the “revolutionary guard,” and an “interim government.” He also negotiated with US officials on Khomeini’s behalf in Paris while they were in Paris, and he accompained the ayatollah on the Air France flight that brought him back to Iran.

In Iran, Yazdi remained close to Khomeini, continuing to serve as his translator and advisor. He was appointed to the Revolutionary Council and also became the foreign minister in the interim government of Mehdi Bazargan in 1979, which resigned amid the hostage crisis in 1980. He was elected to the first Majles in 1981, but FMI members were gradually sidelined from power and some were even physically assaulted in the Majles by mullahs. After Bazargan’s death in 1995, Yazdi became the leader of the FMI and was imprisoned several times. The FMI’s support for and collaboration with the Revolution have never been appreciated by Khomeini’s followers. Yazdi finally confessed that they made a big mistake by choosing “ignorance” over “oppression.” He died in 2017 in Turkey.